Golddoesn’t exist in a vacuum, and is sensitive to cues from other sectors of the precious metals realm, greenback or the stock market in general. What’s going on? Miners’ breakdown and weakness as well as silver’ invalidation of its all recent short-term breakouts confirms the bearish narrative. The USDX confirms it too.

It all indicates that gold is indeed likely to break below the above-mentioned strong support level. 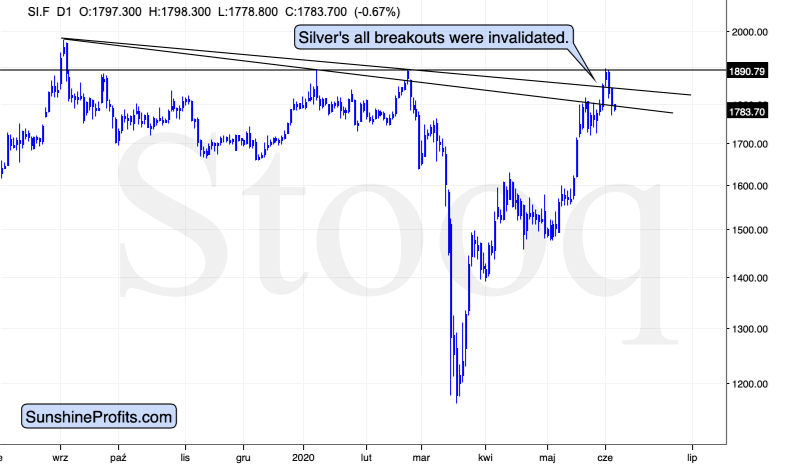 We realize that “this time is different” is usually a costly thing to say, but this time it really is different. This time, gold approached the strong support even without USD’s help (and actually despite its decline) and we saw very clear bearish confirmations from mining stocks, silver, and – as we discussed on Monday – from platinum and palladium.

We have gold stocks that just formed a huge monthly reversal candlestick. 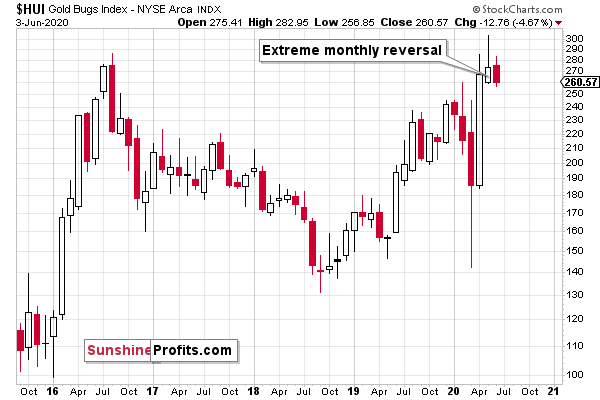 Yes, mining stocks have already declined shortly after May ended, but the size of the decline has been barely noticeable on the monthly chart where the reversal took place. Consequently, it seems that the move has only begun.

And speaking of non-PM markets, the USD Index has just moved to new intraday high. 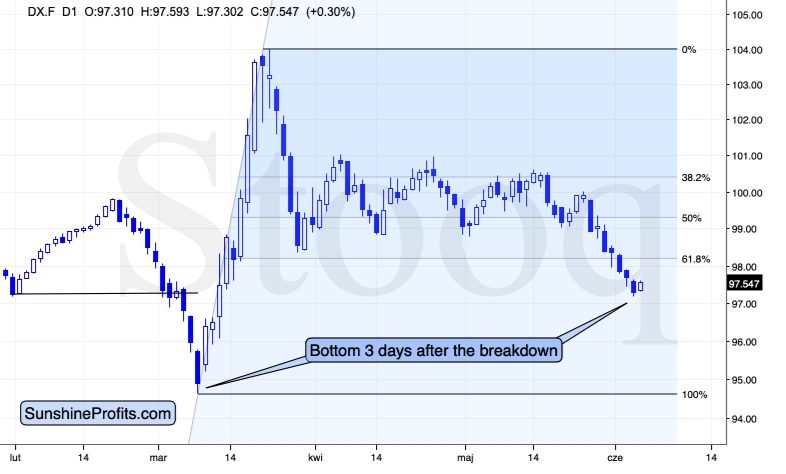 This may seem like nothing to call home about, but it’s actually the first time in 8 trading days that we saw a new intraday high. This is an early indication that the bottom for the USDX is already in. It also fits what we wrote yesterday:

In yesterday’s analysis, we emphasized that the length of the current decline is very similar to the length of the February – March decline that we saw right before the big USDX run-up. We also argued that the situation is relatively similar on the fundamental front. To clarify, there are obvious differences, but the key similarity is that it’s relatively clear that the Covid-19 cases are going up and the economic implications are going to be more severe than it is currently perceived in general, but the numbers don’t yet reflect that. Which is probably why the USDX is still not soaring and stocks are not yet declining. Again – it’s a “yet” in my view.

What we would like to add to the above today is that in March, the USDX bottomed on the third day after breaking below the previous important support (the January low). Today is also the third day when the USD Index moved below the important support in the form of the 61.8% Fibonacci retracement. It could be the case that the big run-up is just around the corner. And since gold is already declining despite the lack of USD’s help, such an USDX rally would likely have a devastating effect on the precious metals sector.

So far, the move up in the USDX is tiny, but it seems to be first crack in the dam. What comes next might not be small at all.

The implications for the precious metals market are bearish.

SEC clears Aboitiz group for next tranche of P30-B bonds