In the past two weeks, analysts have cut their global oil demand forecasts by a staggering 225%. Never in history has the world experienced such a massive reduction in global oil consumption. The situation in the world oil industry is changing so fast; the market hasn’t fully digested the tremendous damage taking place.

Even though public announcements of “10 million barrel per day oil production cuts” positively impacted the oil price last week, there haven’t been any official agreements on curtailing production.

In any case, Saturday’s direct criticism of Putin was echoed in a statement by Energy Minister Prince Abdulaziz bin Salman, and threatened any fleeting hope of an agreement to stabilize the collapsing oil market after President Trump devoted hours of telephone diplomacy last week to brokering a truce in the month-long price war between Moscow and Riyadh.

As an immediate result, the OPEC+ (or R-OPEC) meeting scheduled for Monday has been delayed as Riyadh and Moscow have discovered a new reason to feud: arguing over who’s to blame for the collapse in oil prices.

“No one had expected such a total collapse in the oil market,” said Fyodor Lukyanov, head of the Council on Foreign and Defense Policy, a research group that advises the Kremlin. “Saudi Arabia and Russia have lost control of the situation. Tearing up the OPEC+ deal caused a lot of hurt feelings in Moscow and Riyadh, for Putin and MBS. That makes things more difficult, they have to get over that while not losing face. That’s why they’re both pointing the finger at each other.”

So, after the huge $9 rally in the oil price last week, due to the JAWBONING of production cuts, we may see a rapid “REVERSAL” in prices this week. The important sentence in the quote above is the following… “Saudi Arabia and Russia have lost control of the situation.”

The destruction of global oil demand is so large, it now accounts for 25+% of the total market… and that may be understated. Thus, the focus on Saudi Arabia and Russia for oil production cuts are now IRRELEVANT because the world needs to SHUT-IN at least 15 million barrels per day to make a dent in the market surplus.

THE CHRONOLOGY OF COLLAPSE 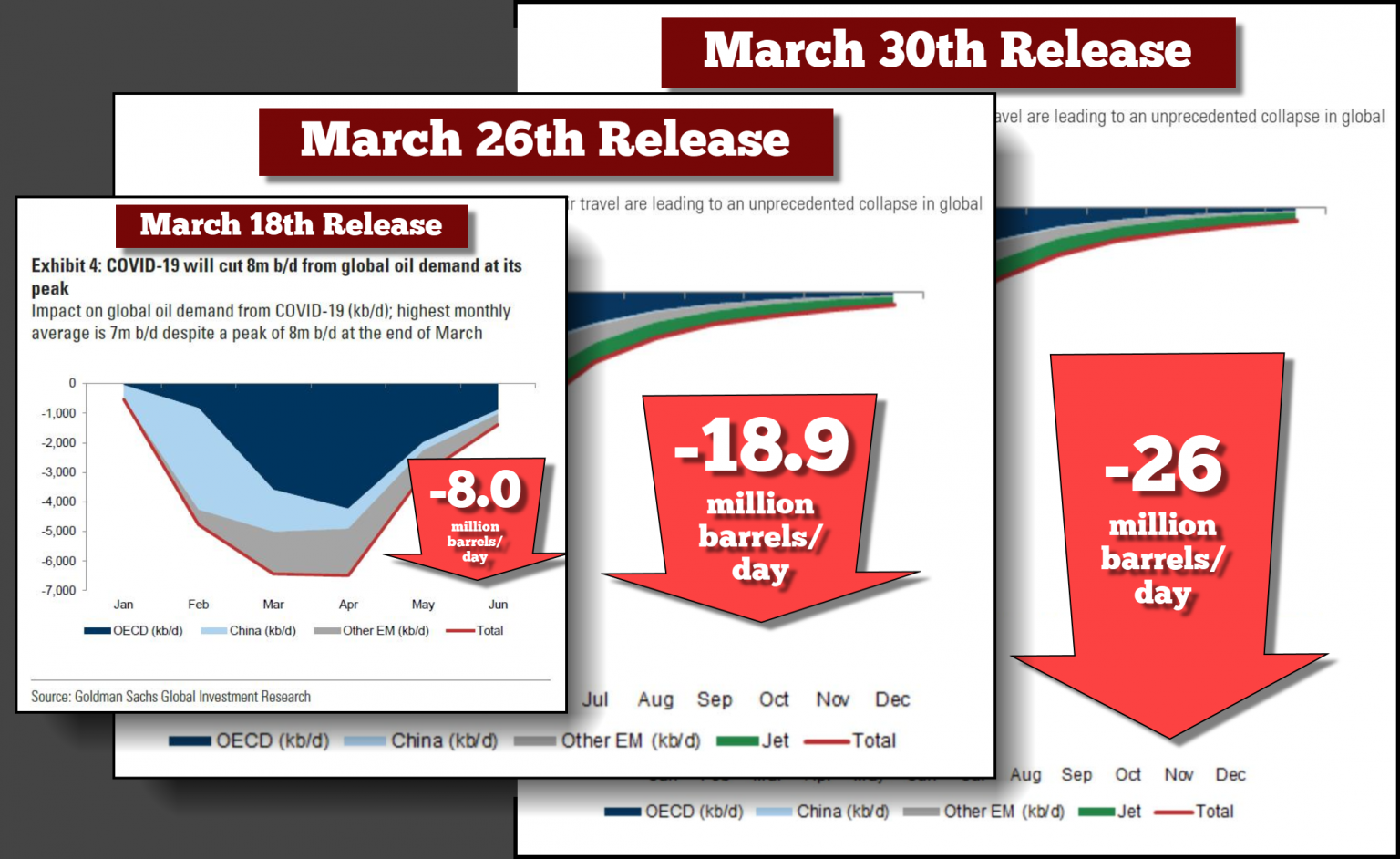 As I stated at the beginning of the article, analysts revised their global oil demand forecasts by 225% in just the past two weeks… actually in 12 days. On March 18th, Goldman Sachs analysts forecasted that global oil demand would fall 8 million barrels per day (mbd) in March. Here was their first chart showing a 7 mbd monthly decline in global oil demand, including an 8 mbd peak at the end of March: 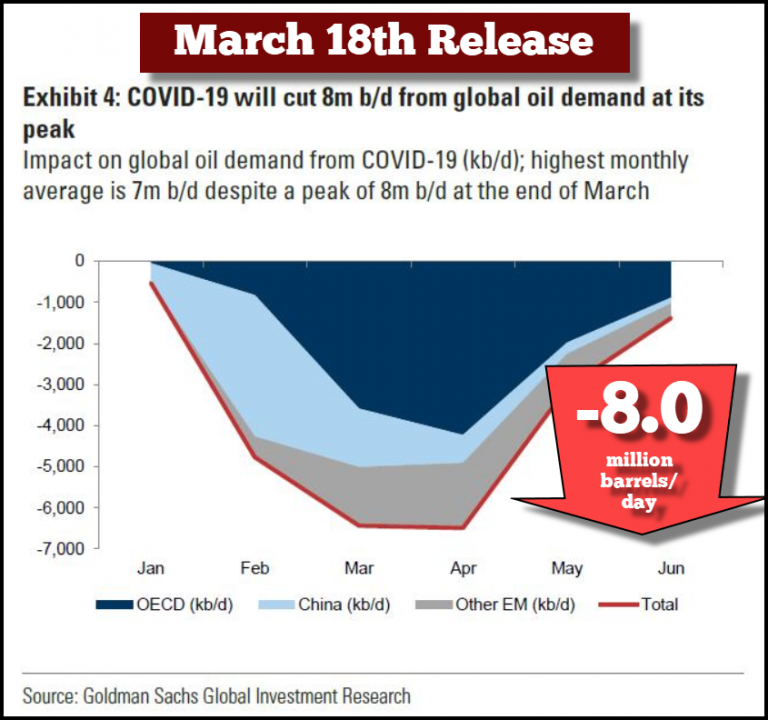 Goldman analysts stated that the global storage capacity remaining was about 1 billion barrels, which would take months to fill. However, the impact from the worldwide contagion was seriously underestimated as Goldman Sachs released a revised forecast on March 26th: 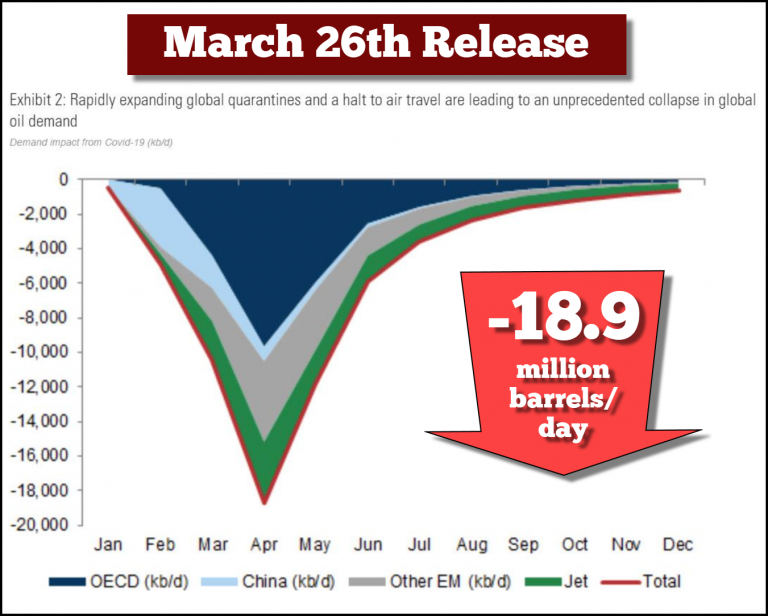 In a little more than a week, Goldman’s analysts revised their forecast to show a stunning 18.9 mbd decline by April. This was more than double their previous estimate. In oilprice.com’s article, Goldman Sachs: Prepare For A Massive Oil Demand Shock (March 26th):

Global oil demand could plummet by 18.7 million bpd in April, deepening an expected demand plunge of 10.5 million bpd for March, Goldman Sachs said, while the coronavirus pandemic continues to claim thousands of lives and forces a growing number of major economies into lockdown.

“A demand shock of this magnitude will overwhelm any supply response including any potential core-Organization of the Petroleum Exporting Countries output freeze or cut,” Goldman Sachs said in a note this week, as carried by Reuters.

On March 26th, Goldman stated that… A demand shock of this magnitude will overwhelm any supply response, including cuts from OPEC. This is by far the most critical factor lost in the INSANE Russia-Saudi Blame Game.

However, in just another four days, Goldman revised its forecast once again: 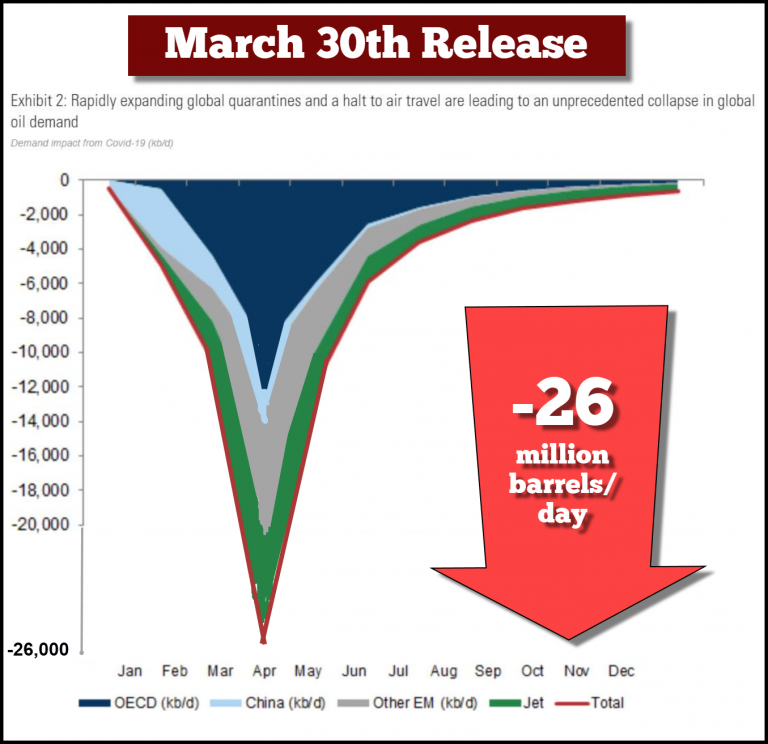 I took the liberties to ADJUST Goldman’s previous chart to include their newest forecast of a massive 26 mbd COLLAPSE of oil demand. Who knows, in another week it could be 30+ mbd or nearly ONE-THIRD of Global Oil Demand. So, if we go by Goldman’s estimate that there were 1 billion barrels of remaining storage available, TWO WEEKS AGO, how long would it take to TOP ALL STORAGE CAPACITY with 26 mbd extra supply??

How about 38 days. If we say that 8 days’ worth of storage was already used in the past 14 days (conservatively speaking), then the world has about 1 MONTH OF GLOBAL OIL STORAGE CAPACITY remaining. This, of course, all depends upon whether or not the leaders come up with a concerted plan to cut oil production.

Furthermore, some regions-countries will reach FULL STORAGE faster than others. For example, with U.S. oil demand down at least 4-5 mbd, it could fill up all storage within the next 2-3 weeks. So, the longer the oil industry waits to cut production, the faster the available storage will be used up.

The unprecedented oil demand plunge in the COVID-19 pandemic is poised to change the oil sector forever, as fewer companies holding high-quality assets emerge after the downturn, Goldman Sachs said on Monday.

“Big Oils will consolidate the best assets in the industry and will shed the worst … when the industry emerges from this downturn, there will be fewer companies of higher asset quality, but the capital constraints will remain,” Goldman Sachs analysts wrote in a note on Monday, as carried by Reuters.

Goldman claims that BIG OIL will consolidate the best assets in the industry. I would imagine this is partly true. However, I believe BIG OIL will also be in TROUBLE. We have no idea what the world will look like after the global contagion passes, but one thing is for sure, the U.S. Suburban Leech & Spend Economy will likely collapse by a large degree.

For those readers who may believe that Goldman Sachs is just part of the GRAND CONSPIRACY of the ELITE to collapse the global economy, it was going to happen regardless. The U.S. Shale Oil Industry was set to peak and decline within the next 1-3 years on its own lousy merits. The global contagion just sped up the process considerably.

Without global oil production growth, the world GDP can’t increase. Thus, financial asset values that are based on world GDP growth are now in serious trouble. Precious metals investors need to keep an EYE on the global oil industry for clues on its impact on the world’s financial system and economy.

SEC clears Aboitiz group for next tranche of P30-B bonds